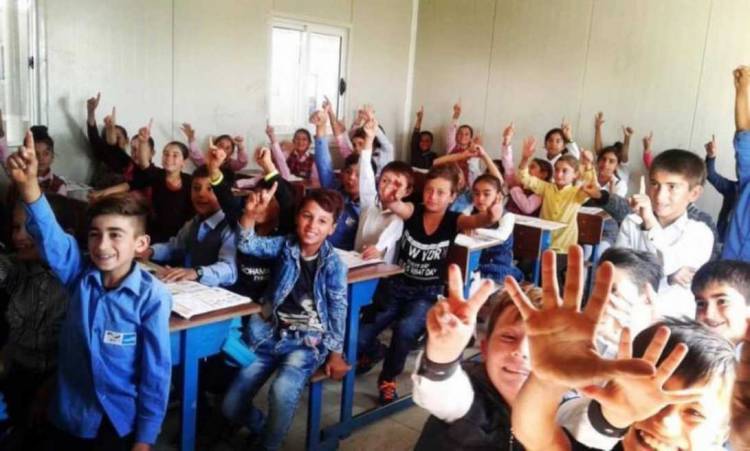 As I walked from my home of the hospital portables in a corner of Bajed Kandala internally
displaced persons camp for Yezidi's to the school in the opposite corner, children with backpacks
and books swarmed the roads. Hundreds of children ages five to ten were almost collapsing under
the weight of their work and activity books. Six little girls, who would routinely sit with me at the
clinic while I write, ran up and grabbed my hands. Not understanding each other’s languages, we

greeted each other with a big smile and a hello in Kurdish.

As we approached the school more and more children gathered, screaming in joy and excitement
for the new year. In Bajed Kandala more than 3,000 children ages four to seventeen started Arabic
or Kurdish school on 15 October. Per usual, the first day of school is for administration purposes to
enrol new students and get a rough estimate of the ratio of students per teachers. I was assigned
grades one through five in the Kurdish school which amounted to about 300 students; I am the

only English teacher. The situation was even more dire than I expected.

In camp two, the Arabic school has more than 800 students currently enrolled but zero teachers.
The Kurdish school has more than 600 students with five teachers, six including me. There isn’t a
shortage of teachers in camp but rather a shortage of payment from Baghdad, the Kurdish Region
Government (KRG) or international organizations. Baghdad pays the Arabic teachers to keep Arabic
school in commission, however since political tensions increased in 2015 Baghdad has neglected
their duties in the Kurdish region. Since 2014, the KRG has also neglected their education duties by

only hiring health workers under the Ministry of Health and freezing the hiring of teachers under
the Ministry of Education, as stated by officials. Erbil freezing one but continuing the other shows
their priorities and became very clear when I attended Health and Education Cluster meetings.
Health Cluster meetings consisted of a Ministry of Health representative running the meeting and
taking detailed notes of which organizations were working where and what their complaints were.
In the Education Cluster meetings, however, an international organization would conduct a slide
show of their projects, ask others about the progress of their current projects and, if we were
lucky, a representative from the Ministry of Education would arrive late and debrief us all on only

their projects in the city. Bajed Kandala camp was never mentioned.

Aside from internal politics international organizations are expected to pick up the slack. In this
case ‘the slack’ means practically everything from school supplies and building materials to
providing teachers and their salaries. The United Nations (UNICEF) and the Norwegian Refugee
Council (NRC) have the largest presence for children protection in our camp and have provided
resources such as notebooks, uniforms and backpacks. This is important, however resources are
useless if there are no teachers. Several teachers in the camp have been promised payment from

UNICEF and NRC for the past three years but nothing has been received.

Joint Help for Kurdistan, a Swedish NGO, provides health care primarily but has adopted education
as the need arose. For the past two years, volunteers from the United States and Europe have
taught English to beginning, intermediate and advanced students in Bajed Kandala providing some
kind of education even if the main schools were closed. In past two months, however they have
also adopted the role of an education advocate for the whole camp. Thanks to international private
donors they have obtained funds for seven twelfth grade teachers for the rest of this year.
The internal politics between government responsibilities and international help has created a
system of inefficiency where little to no education is the end result. Confusion between which
government is supposed to provide what and which international organization is stationed where
has caused government officials to submit a formal complaint to the Board of Relief for
Humanitarian Affairs (BRHA) stating that Joint Help for Kurdistan is neglecting the education needs
of Bajed Kandala. The irony is that a medical organization consisting of 12 people, which by default
due to similar circumstances is now the main clinic for over 6,000 people, is also responsible for all

education needs for not just camp two but apparently camp one as well.
As shown, the situation for internally displaced people is dire and needs to be addressed
domestically and internationally immediately. Education is a vital role in the rehabilitation and
growth of a community, especially in a community that has experienced massive trauma and
uprooting. It is unrealistic to think that due to bureaucratic stalemates time is available to ‘sort out
responsibilities’. These children are the future of our world and they can not be leaders if they are

Religious bias in US aid cripples rebuilding and stabilization...