Love saved them from the blast! 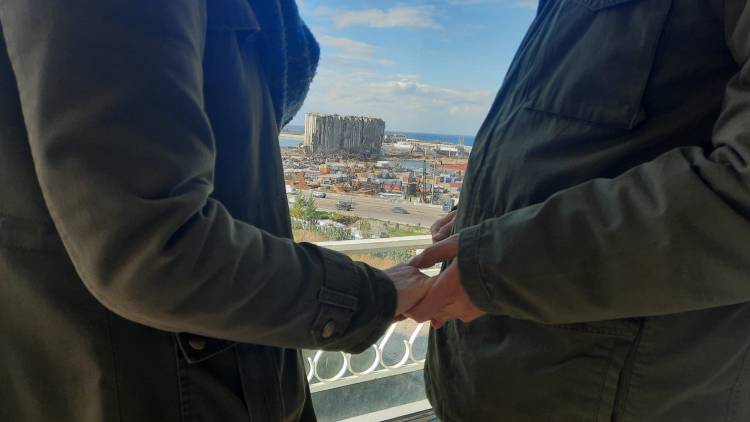 At. 18:06 on On August 4, 2020, Tania and Mario looked from the window of their apartment at the fire in the Beirut port. When a powerful explosion hit their apartment, Mario suffered so badly that he could treat the wounds of his semiconscious wife with only one hand.

In February - almost 1.5 years after the explosion - we visited their apartment. Mario held Tania tightly, looking into her eyes. The man has more than a hundred stitches on his body, and his wife suffers from headaches in cold weather. Someone put windows and doors in for them, but no one helped them renovate the interior. This is what Beirut still looks like almost 2 years after the explosion. Many NGOs withdrew, leaving the work unfinished. Some of the buildings are renovated from the outside, but many apartments are still empty as people do not have any furniture, including beds to sleep on.

Another issue is the little help given to people who were not among the poorest before the explosion. Tania and Mario are an example of a couple that did well until the crisis. After the explosion, the middle class did not receive the same support as the poorest, which led to situations in which not only their apartments were restored but also micro-enterprises were not reactivated.

We visited them again in May. Our work has been completed and our dear couple was full of joy. Like the first time, Mario was hugging his wife, speaking in a low voice:

"I only feel good when I know she is happy"

Their energy, love and optimism have also affected us, giving us the motivation to continue the Mission. Together with Caritas Łódź, we were one of the first to help Beirut in removing the effects of the explosion - today we are one of the last to remain.

We have recivedt a touching letter from Tania and Mario - for us, for you! Let's read it together:

Tuesday 10th of May

Dear Sumar, Maciej, Chadi and everyone we didn't have the chance to meet in person:

After the unforgettable explosion of the 4th of August 2020, and everything we went through physically and emotionally because of our injuries, we woke up to reality and realized our home was totally destroyed. At that stage, the most difficult part was to find an NGO who would take care of the renovation of the wooden part specially, knowing that our apartment was a bit different from others, not having walls and doors but divided with wooden closets.

More than year after the explosion, one day while I was at my dentist repairing the damages, I received Sumar's message with the hope that a solution for our home may be on its way. We met with the team a few weeks later and then it took some more time before actual work started on the site.

Being a very picky person, everything seemed like a mountain I wouldn't be able to climb.

It was an actual puzzle to rebuild with major difficulties to collect the broken pieces that either existed or did not.

We would like to express our warmest thanks to Domus Orientalis & Caritas of Łódź for your continuous support to realize this financially and emotionally difficult project.

Very special thanks as well to Chadi Assfour and his lovely team. He is a very professional person, always open to listen to suggestions and make needed changes as necessary. On the personal side he was very caring and supportive considering what we have been through.

The members of his team were very polite and always worked together well making sure all details were addressed. Mohammad: A very clever craftsman who is very detail oriented and always worked calmly. Abed el Rahman: His effort and hidden sense of humor were always welcome.Young Ahmad: Always helpful with a smile. All in all, they all worked so hard, they put their heart into every detail. I will always be thankful to them all.

As for Sumar, a wonderful person with a big heart and strong will, this whole reconstruction effort could not have been done without her.

We are genuinely lucky and immensely grateful to have worked with you all.

A big Thank You from the heart: May God bless you all

Let's buy a bus for Ukraine

We create a unique place in Lodz - the Centre "Fratelli Tutti"

Give a Job! Beirut - restoration of worklpaces, December...

Give a Job! Beirut - restoration of worklpaces, summary...

"United in pain" - support for the firemen's families.

Meet YBTE - Hope for the Lebanon!