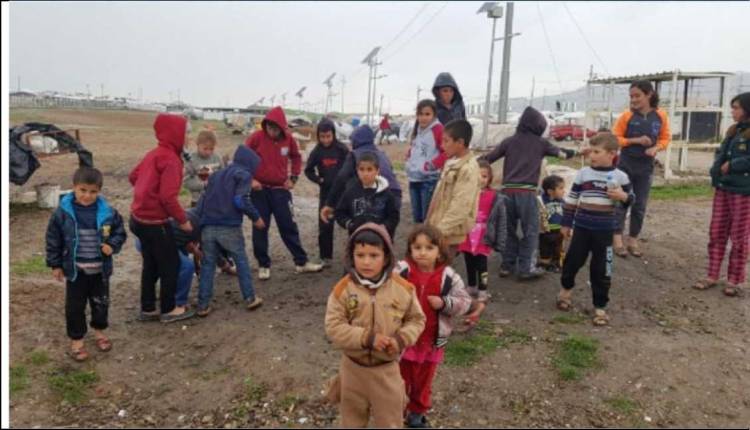 The situation on the ground in Kurdistan is much worse than what is being reported. In the south,
Kirkuk has not only been attacked but there have been cases of looting and killing as well as
rumours of rape. Over 100,000 people have fled the clashes in Kirkuk and the surrounding areas.
The Iraqi military has said they would stop at the 2003 line of the Kurdistan autonomous region but
Hash’d al Shaabi (PMU) has not honoured this statement and is already passing that line. Turkey
has stated that if any military force enters Erbil, the capital of Kurdistan, they will protect the
integrity of the Kurdish region and bomb all intruders. This statement has puzzled people because
of the amount of rhetoric stating Kurdish independence and unity is illegal and Turkish borders

On the eastern side of the Kurdish region Iran has had informal forces scurrying around inside the
Kurdish region causing Kurds to worry about an impending invasion. Sulaymaniyah has been the
center of potential Iranian intentions for invasion and Iran has been using Hash’d al Shaabi to

move further toward Sulaymaniyah when the Iraqi military stops.

What isn’t talked about is the 1.3 million people who already live in internally displaced persons
(IDP) camps mostly in the western part of the country. I was living in Bajed Kandala camp two for
two and a half months and have seen the security deteriorating since before the referendum. The
week of the referendum Turkey performed military exercises on its border. This caused a build up
of Peshmerga forces and fear within the border camp of Bersivy. Thousands of Yezidi people
moved back to their home in the Shingal (Sinjar) area which became a huge issue when many

attempted to return after a weeks time due to the lack of security and resources in the Shingal
region. Only a few left from our camp, Bajed Kandala by Faysh Khabur, but three Yezidis that did
were killed when they stepped on a land mine that had not been removed from their home. The
mass movement of people from camps is a problem because the United Nations states that if an
inhabitant leaves their tent with the intension of moving outside the camp they are not permitted
to return to any camp there after. This provision is to control aid and security for the IDPs and
refugees and is put in place with good intensions, however events like these reduce the amount of
people receiving aid. From what I heard, the UN made exceptions for the movement of people

because there were to many in an insecure area.

that have not been reported on.

In the past two weeks a major shift of KRG and Baghdad territory has occurred. Two weeks ago
Hash’d al Shaabi with the Iraqi military controlled everything south of the Shingal city border. On
16 October Hash’d al Shaabi took over Shingal city without a fight. The Yezidi Peshmerga called the
KRG for assistance but all troops were already stationed in Kirkuk. On 17 October PKK (the Kurdish
Workers Party from Turkey) talked with the remaining Yezidi generals about territory gains and
terms of surrender. On 18 October Iraqi military placed several helicopters and many of their
troops in Shingal city with direct access to Baghdad. They also confiscated all weapons from the
inhabitants in the city while also looting shops and stealing cars. That night ISIS (Daesh) returned
to Zummar and started attacking its inhabitants. Many fled (including the family of the doctor who
works in Bajed Kandala) to Duhok and Zakho and remain there still. Peshmerga ousted Daesh that
night but Zummar has been a battle field between Peshmerga and Iraqi forces since 20 October.
On 19 October a huge number of Iraqi and Hash’d al Shaabi forces claimed the Shingal mountain
where PKK were stationed and told them to leave. The PKK obliged which left nothing between the
Iraqi army and Hash’d al Shaabi having open access to take over territory all the way up to Rabia

(a border city with Syria in the northern section of the Kurdish region).

On 20 October all Yezidis were invited to discuss what the Yezidi population should do about the
impending war. All agreed the least amount of fighting the better. The next day Yezidis from
Sheffadin to Rabia took down the Kurdish flag and put up the Iraqi flag. On 22 October rumours
were spreading of continued looting and harassment by Hash’d al Shaabi all the way to Rabia and
on 23 October Peshmerga forces and Hash’d al Shaabi clashed in the town of Rabia. On 24 October
Yezidis in Bajed Kandala camp became very worried of clashes between the two sides that would
forcibly displace them again. Peshmerga had placed their forces behind Bajed Kandala in an oil field
naturally stating that the camp might become the next battle field. Everything had been quiet until
26 October when Yezidis were woken up at four in the morning to the loud sounds of bombing
which continued till around nine o’clock. Joint Help for Kurdistan (JHK), a Swedish non
governmental organisation, has been in Bajed Kandala camp two for three years. They serve as
camp two's hospital for 6,000 Yezidis. As of today, 26 October, they now serve as a hospital for all
civilians and Peshmerga injured from the front lines. Also, camp one's hospital, which is run by an
international organisation, closed their services due to the security concern today making JHK's

eight portables the only medical service for more than 13,000 people.

Due to security concerns I have recently left Kurdistan, however contacts on the ground give me

updates several times a day of the changing conditions.

The humanitarian crisis that is building in this region is extremely understated. Families that were
never displaced are now being displaced. Families that were already displaced are being displaced
again. There is food and water, however access to it will become increasingly difficult as trade
routs are impeded by war and wells are abandoned. Winter is rapidly approaching, especially in the
mountains where many IDPs already live, which will increase the death count due to freezing.
Everything I have stated is only physical safety but I have not even mentioned the emotional and
psychological trauma that is occurring due to flashbacks from Deash. These people need help and
in a war environment humanitarians, like me, cannot operate properly. The world needs to step up
the pressure on Iran, Baghdad, and the KRG to end the fighting to create an environment for

volunteers and humanitarians to resume their aid.

Add on: The main road between Shingal city, that passes through Sheffadin and Rabia, has been
closed to all civilians since Sunday 22 October. This has trapped people within the war zone and
prevented any aid from reaching them. In the territories now controlled by Hash'd al Shaabi, all
international and local organisations left due to security concerns and are currently not allowed

Project of the month: Give the job to Aleppo’s people!

Kurdistan, Iraq: Education is a First Priority, Not an...

Religious bias in US aid cripples rebuilding and stabilization...